Notice: Trying to get property of non-object in /home/peter19/public_html/glovacation.com/wp-content/plugins/wordpress-seo/frontend/schema/class-schema-person.php on line 152

Notice: Trying to get property of non-object in /home/peter19/public_html/glovacation.com/wp-content/plugins/wordpress-seo/frontend/schema/class-schema-person.php on line 230

Notice: Trying to get property of non-object in /home/peter19/public_html/glovacation.com/wp-content/plugins/wordpress-seo/frontend/schema/class-schema-person.php on line 236

Some people like to march to the beat of their own drum. Others like to enjoy the bass of a world class DJ rather than their own private vinyl collection. On those days when you want to go big, Toronto has the dance clubs that are sure to please. After the closing of giant the Guvernment nightclub, Toronto hustled in another era of smaller and friendlier nightclubs, but there always is a place where people go to get their dance on.

Way into the wee hours of the morning, we have your cocktail flowing, hip shaking locations all over the city. It is just an Uber ride away to enter a different world. It will be hard to imagine that this is the same city where you took your morning Starbucks run. These dance clubs prove there are a lot of different ways to stay awake. Whether you stumble home at 2am or 7am, you only have to wait a short while before you get to relive your experiences over brunch.

Some of our locations expect you to dress your best, while others are more concerned that you drink your best. Ask your Magic 8 ball what the outlook will be for your evening, pick a number and call your most fun friend. It is time to party. 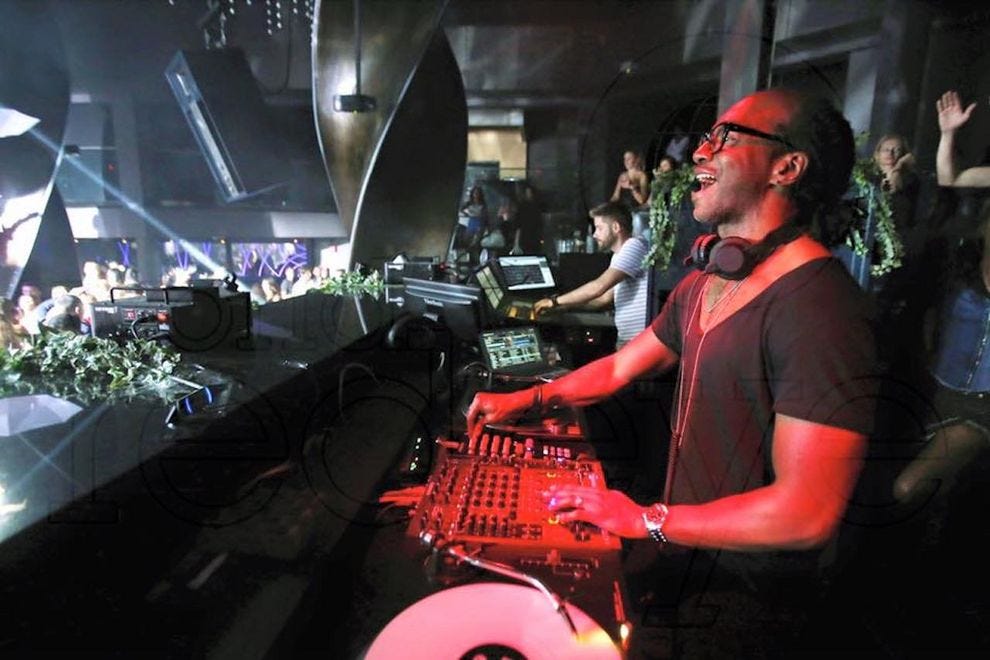 This house music club brings in international DJs for a heart thudding good time. There is a cover charge in place once you climb the stairs to prove that you are physically fit enough to put in some quality dance time. 13,000 square feet welcomes even the most ferocious dancers, with bars on either end to make sure that you don’t get too thirsty. You won’t wonder why it is called “Nest” for long, as giant, art-deco nests are everywhere. Closing hours can be even later than the official 4am time.

Recommended for Dance Clubs because: The place to be for people who like DJs, lights and…that’s about it.

Courtney’s expert tip: As per most nightclubs, don’t expect things to get good until after midnight. 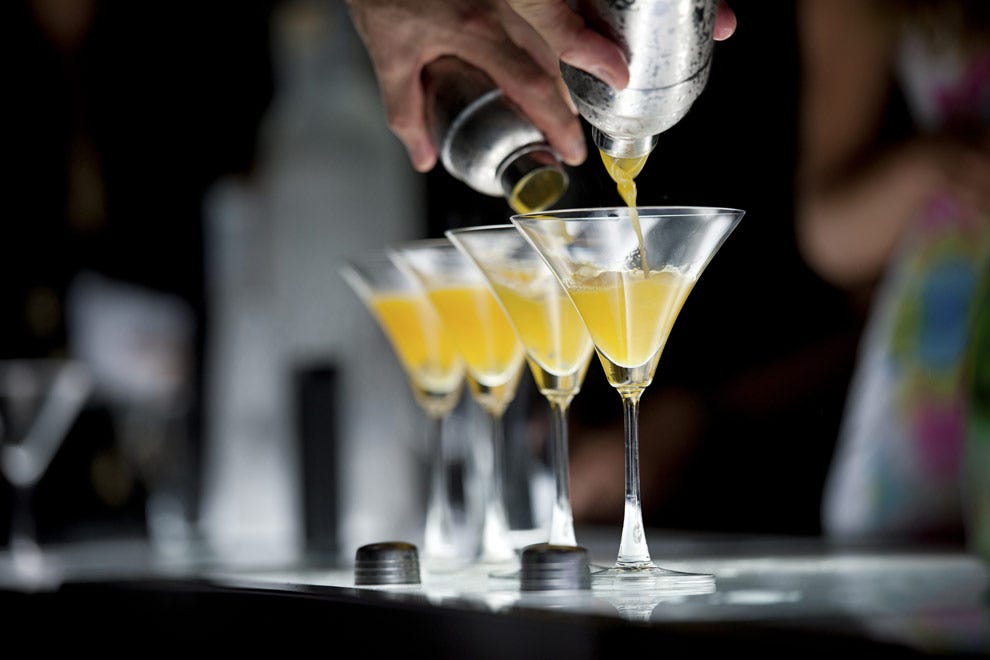 You don’t have to like vodka to have a good time at Pravda Vodka Bar. (Of course, it won’t hurt – there are 100 of the world’s best vodkas housed in a vodka cellar.) Monday and Tuesdays warm up the week with lounge music but on Wednesday there is already a DJ helping to warm up the dance floor. The DJs are joined by live musicians on Thursday and Friday and on Saturday night, the party gets serious with dancers and vibrant entertainers making sure that you don’t sit on your behind all night long.

Courtney’s expert tip: Happy hour during the week between 4 and 7pm. Expect deals on drinks and a complimentary appetizer. 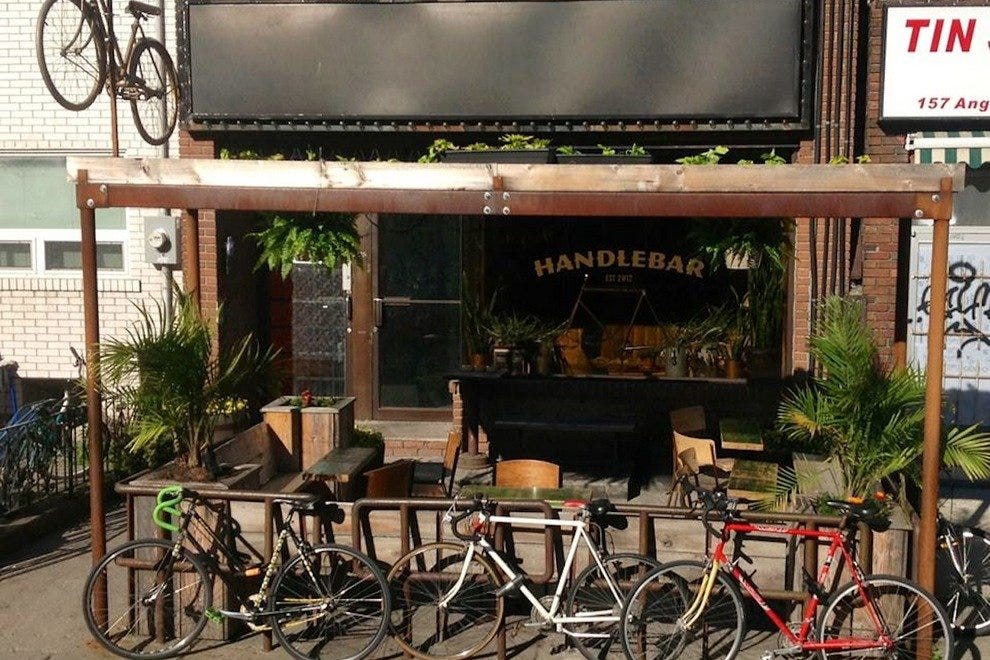 Helmet Head is not exactly a look we associate with being sexy. However, it doesn’t matter because Kensington is more about attitude than appearance. And Handlebar has plenty of personality. As Toronto becomes more cramped, dance clubs become more narrow and this place is no exception. Beer, whisky and mixed drinks can be had for under $10, though, which might help to expand your personal boundaries. Expect an eclectic mix of music, from soul and motown to top 40 – all live. The dance floor is small enough for people to dance without feeling obligated. You can always spend your time engaged in the noble pursuit of beer drinking.

Recommended for Dance Clubs because: We wouldn’t recommend that you drink and bike, but drinking and dancing? That is a different story.

Courtney’s expert tip: Every Tuesday is “Hot breath karaoke.” Sing as badly as you dare and possibly win a prize. (Guts deserves recognition.) 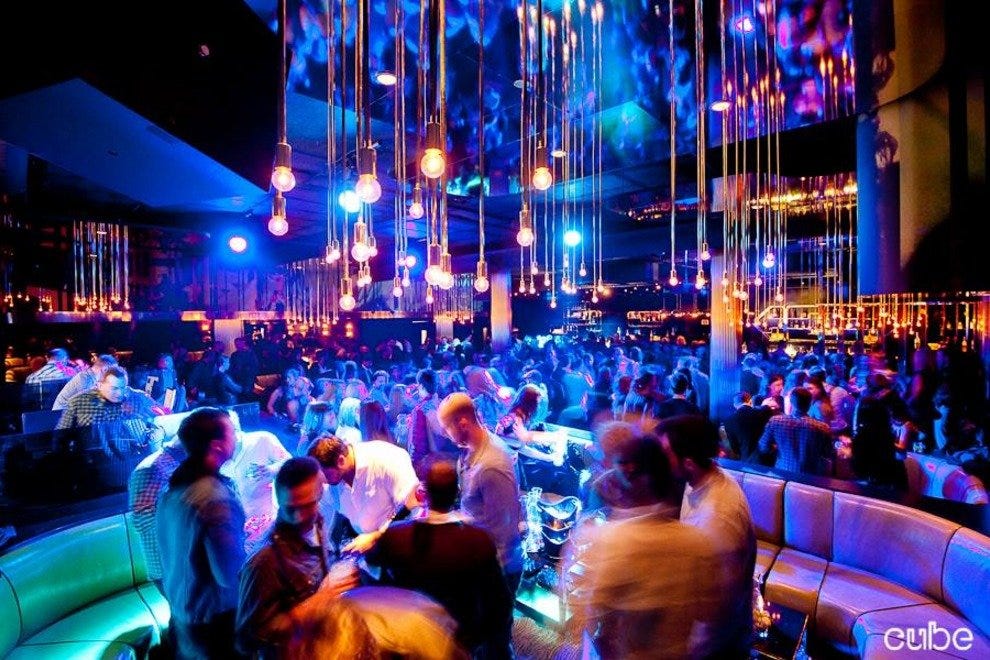 Although imagining dancing in a place called Cube might conjure up claustrophobic images, Cube is indeed the opposite. Impressively spacious, L shaped yellow vinyl couches snake around the club, offering the opportunity to rest tired feet in a charmingly retro fashion. Most people choose to stand with cocktails as accessories, swaying to top 40 and house music. Built in the reformed Ultra club, Cube attracts the over 25 crowd. Cube claims that it was built “with evening mischief in mind.” Some clubs seem to be dark to hide their dinginess, but Cube is the rare nightclub that could get away with being more brightly lit.

Recommended for Dance Clubs because: Inspired by sixties and seventies designs, stepping into Cube might make you feel as if you were at Studio 54. In a good way.

Courtney’s expert tip: Cube is a great spot to spend a summer evening. The terrace overlooks the CN Tower directly, making it an urban dweller’s dream.

This newer nightclub (opened in 2019) is taking over where the warehouse Uniun left off. Two rooms with two different sounds and more than enough space to let the night take over (14,000 square feet enough for you?). Fridays tend to be a mixed bag of DJ favourites and Saturdays are mostly top 40 beats. Ladies are free before 11:30pm on Saturdays and if you want to splurge, VIP packages run from $480 and will grant you a booth, a line bypass and complementary admission. (You can easily book a table online if this is more your speed than waiting in line.)

Recommended for Dance Clubs because: Digital artwork, leather upholstery and music that will keep you on your feet for hours. 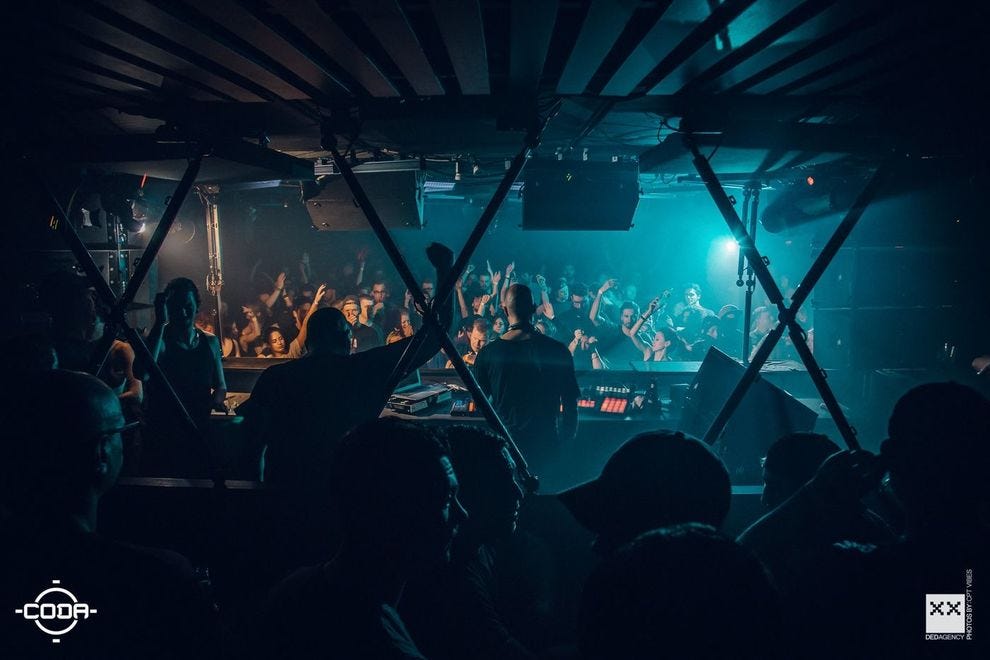 Formerly The Annex Wreck Room, Coda is a nightclub that is super proud of their audio and lighting system. Your favourite energetic gym songs will feel like they are directly pumping through your veins. The specialty is electronic, house and techno music with underground DJs often visiting to host your weekend nights. Coda even has a spacious dance floor that doesn’t require you to fuse to a stranger. Dance anywhere and dance all the way until 5am. Coda even offers snacks, like chicken tacos and freshly cut fruit that will have you making better decisions than a 2am street meat run.

Recommended for Dance Clubs because: Vibrant, safe and inclusive, with a focus on what really matters: the music.

Courtney’s expert tip: This is one of those rare nightclubs that lets you dress as you wish: concert tees as welcome as the highest of heels. 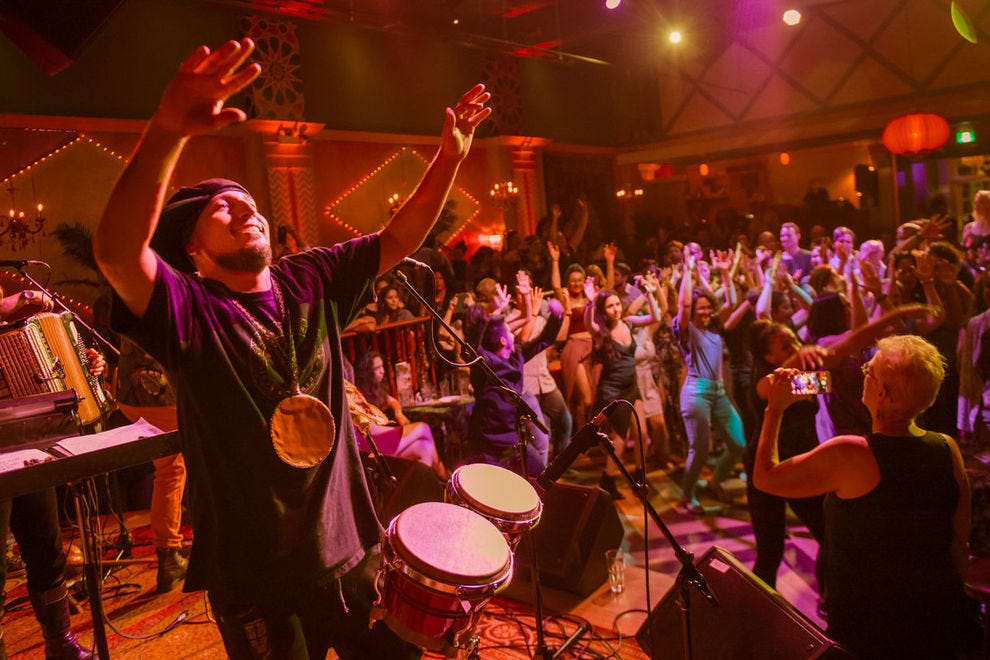 TO’s home of “World Music,” Lula hosts a fantastic array of local bands playing anything from Latin jazz and Cuban to African pop and salsa classics. Owner Jose Ortega puts it best: “It’s like going to Cuba without the political complications.” The former movie theatre has warm colours, sparkling chandeliers and red velvet curtains. If you are feeling shy with your dance moves, there is a weekly dance lesson to get you a little more comfortable. Of course, there are always cocktails, including several varieties of mojitos (cucumber, mango, coconut) to get you moving. Reserve early for bottle service – the lineups can get long.

Recommended for Dance Clubs because: Musicianship, tropical drinks and people who love to dance.

Courtney’s expert tip: Lula has its own record label Lulaworld records to showcase its local latin and global music talent. When the music feel right, you take it home with you. 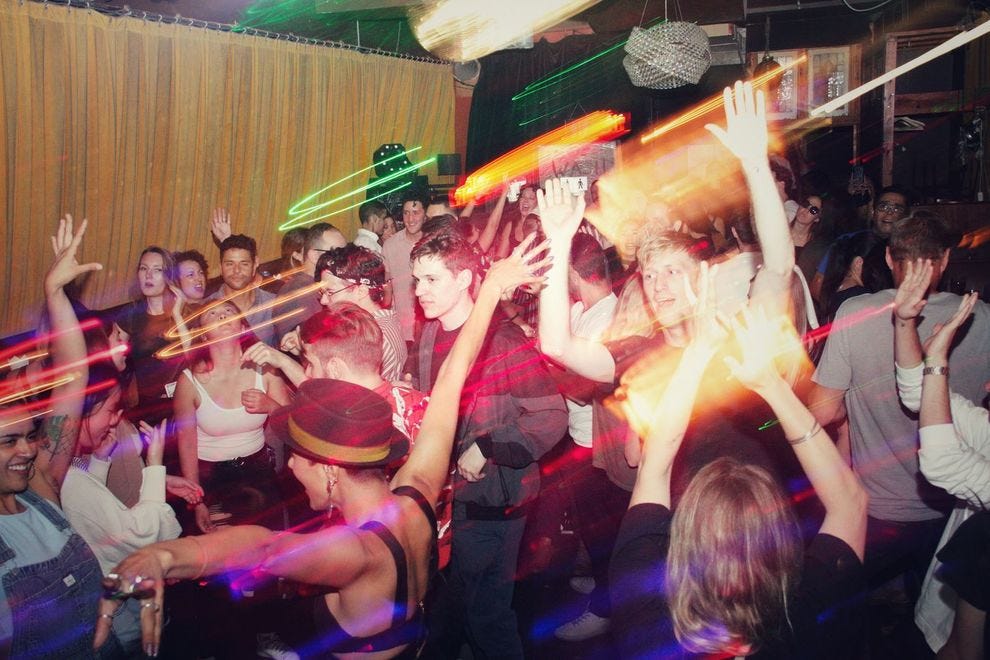 Photo courtesy of The Piston

Dance clubs have been evolving in Toronto since the 2000s and The Piston is a prime example of that. On the trendy Ossington strip, The Piston straddles the line between bar and nightclub and does it well. The back of the bar is set up for 100 people to dance their faces off, with live music and DJs every single night of the week until 2am. It may be smaller than a lot of other places we would put under the dance club umbrella. However, it has a snazziness to it that we couldn’t ignore. With lush curtains offset with leather booths, this is the kind of place you come to dance with the friends who want to kick back and don’t require VIP bottle service.

Courtney’s expert tip: Expect bands Tuesday-Thursday and DJs on the weekends. There is a disco every Friday and rotating events every Saturday.

Read more about The Piston → 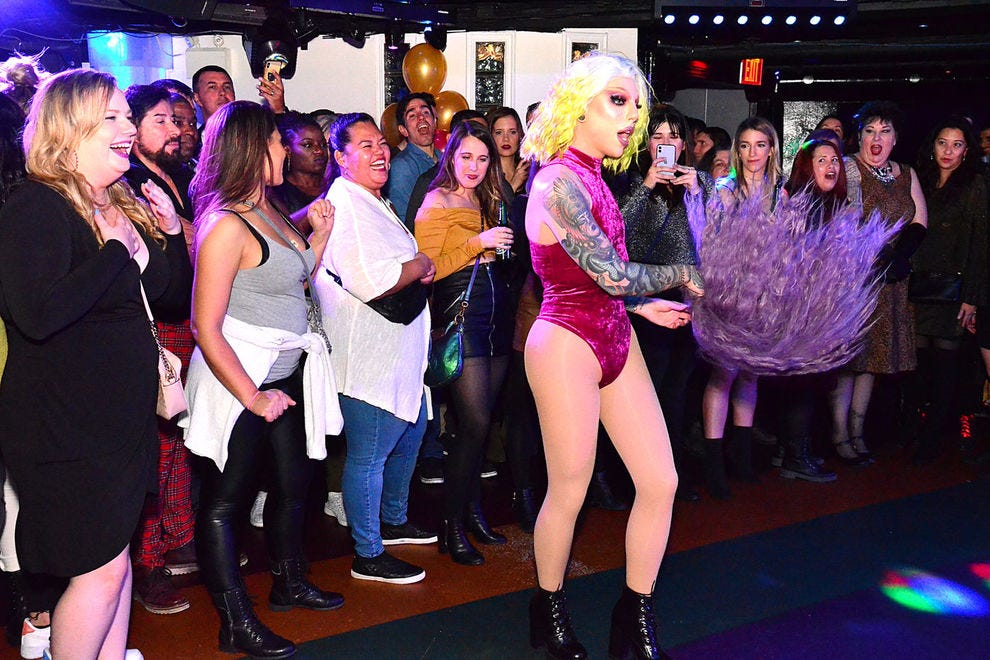 This is Toronto’s longest running Latino drag bar and it has always been a safe haven for the LGBTQIA community. El Convento Rico is a basement club located in Toronto’s Little Italy neighbourhood. Be prepared to see some gorgeous queens shake it to the Latin beat as well as one of the most diverse crowds of any club in Toronto. Absolutely everyone is welcome and there is no official dress code so say goodbye to pretense. Expect Top 40 mixed with Salsa with retro music for good measure. Revel in the false eyelashes, grab a martini and shake what your mama gave you. It’s the right thing to do.

Recommended for Dance Clubs because: Gay or straight, young and mature, everyone is welcome at El Convento Rico.

Courtney’s expert tip: If you haven’t been clubbing in awhile, attend on Friday night and check out their dance lessons. 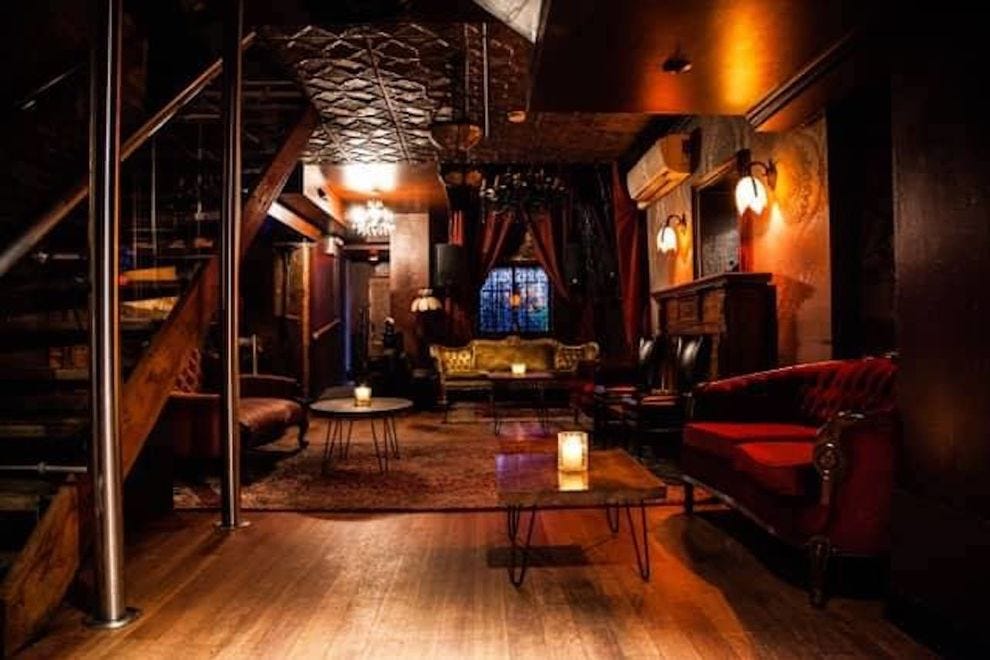 In a heritage building in Toronto’s entertainment district, you can get cozy with candles, antique chandeliers and velvet couches. Or you can dance your face off. Parlour is designed to allow you to do two seemingly disparate things in one evening: have a meaningful conversation and throw your hands wildly in the air in the name of dance. It has a cutting edge sound system designed for house music DJs that come from across the globe (read: more than a laptop). Cover is normally around the $25 mark (but some nights there is no cover at all) and the crowd tends to skew towards over 25.

Recommended for Dance Clubs because: Victorian decor with modern music? Parlour has a unique bent on dance clubs.

Courtney’s expert tip: There is a minimum of $50 to use a debit or credit card, so come armed with cash.

The best ski resorts in the world whatever your style

Which Type of Holiday House Rental Should You Stay In?

We will be happy to hear your thoughts